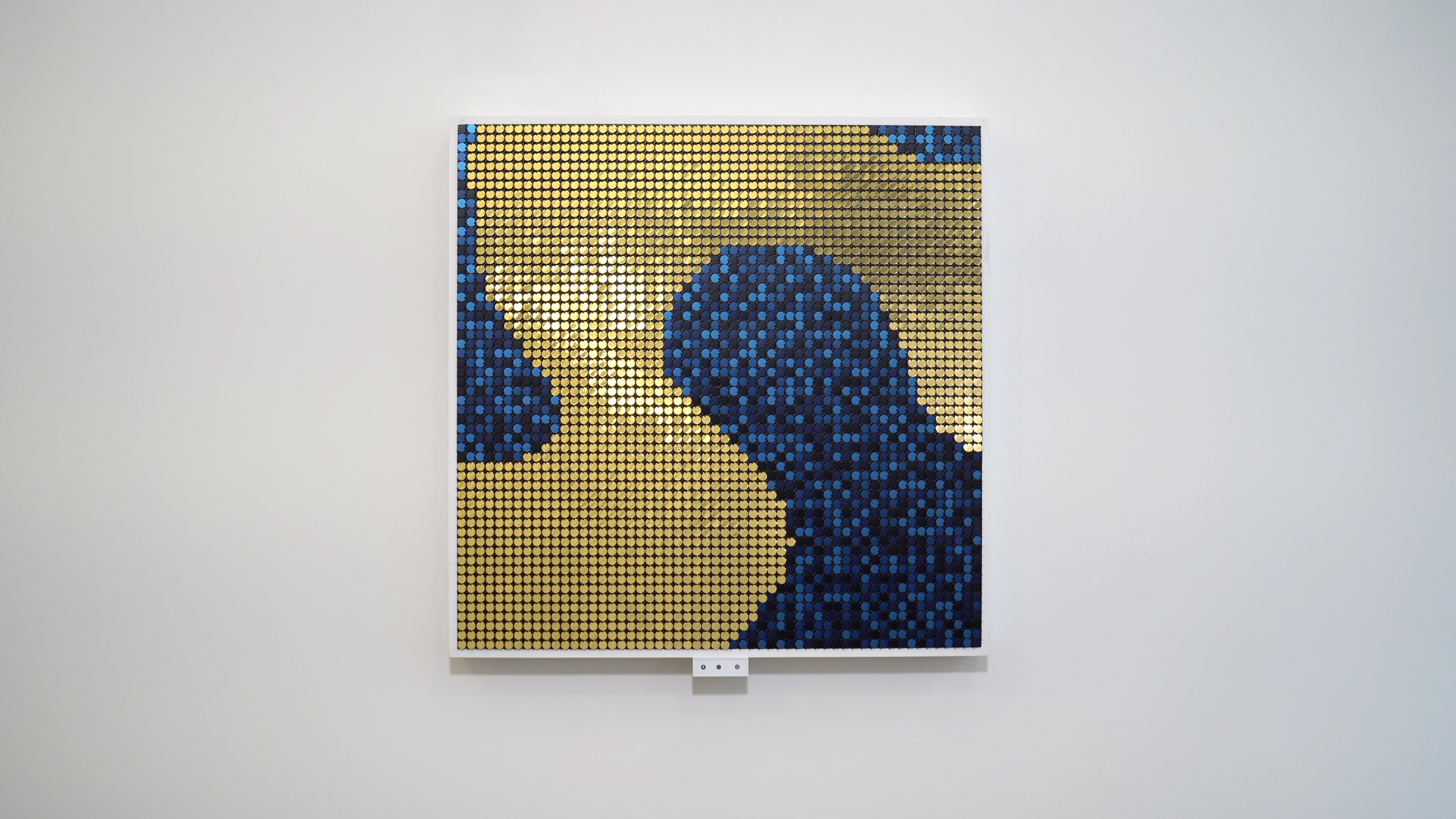 The first in a groundbreaking limited-edition series on Climate Change, ”Svalbard Ice“ uses BREAKFAST’s patented Flip-Discs medium to reflect changing weather patterns in one of the world's northernmost archipelagos, (halfway between Norway and the North Pole), as well as the effects of global warming.

Measuring 34.7 inches square, “Svalbard Ice” features 3,136 patented electro-magnetic Flip-Discs that intelligently flip between multi-blue and gold to create a continuously evolving representation of live oceanic data, and combine it with any viewer’s silhouette.

“‘Svalbard Ice’ is a deeply interactive work meant to raise a powerful and complex set of questions about the world we live in, and the future of our species. Using forward-looking technology, it asks each of us to consider what will happen as we find ourselves underwater in an increasingly atomized society, and what to do when, despite an exponentially-growing abundance of knowledge, we still fall victim to our own dubious abilities to avoid catastrophe—especially when each of us is acting alone.” —Zolty, Co-Founder and Director of BREAKFAST

“It’s always a pleasure to experience art in new media, and what BREAKFAST is doing is far beyond the cutting edge. Svalbard Ice is a testament not only to BREAKFAST’s creative ingenuity and commitment to climate awareness, but to technology’s potential for revolutionizing artmaking.” — Noah Davis, Specialist and Head of First Open, Christie’s

“Svalbard Ice” will be part of the First Open | Post-War and Contemporary Art auction which will take place online from December 9-18. Christie's has set the estimate of “Svalbard Ice” at $8,000 - $12,000. The only other two pieces currently in the series, “Venice Water” and “Mauna Loa Air,” sold just last week for $25,000 each at the 2019 TEFAF Fall New York Show.

"Venice Water" (left) and "Mauna Loa Air" (right) are two other pieces from the Climate Change series that both sold at TEFAF in New York last week for $25,000 each.

The inclusion of BREAKFAST’s work in Christie’s sale reflects the art world’s growing interest in forward-looking works that incorporate new technology, also evidenced by Pace Gallery's launch of PaceX this fall. In 2018, Christie’s sold its first painting created by artificial intelligence, “Portrait of Edmond Belamy” for $432,500—more than 43 times its initial high estimate.

Founded in 2009, BREAKFAST is a new media art studio focused on creating software-and-hardware-driven artworks that transform the online world into tactile experiences, while also connecting viewers to distant and disparate geographies, realities, and data-streams. The studio's practice employs a unique blend of computer science, mechanical engineering, and playful, emotionally-striking aesthetics to invite audiences to reflect on the relationship between the physical, the digital, the global, and the intimate in the Information Age, as well as the changing relationships between human bodies and technological innovation.

Every two years, BREAKFAST invents a new kinetic medium that it can use to create new small-and-large-scale private and public artworks. Flip-Discs, unveiled in 2016, has been the basis for more than 40 exhibitions and permanent artworks across North America, Europe, and the Middle East.

Brixels, the studio's latest medium, first appeared in 2018 with their piece Brixel Mirror. Their most recent piece which utilizes the medium was unveiled in September at Equinox’s new corporate global headquarters, which opened last month at Hudson Yards. The  22-foot tall, five-foot-wide permanent installation, “Pulse,” comprises 390 infinitely-rotating mirrored and matte-black kinetic bricks, synchronized to create a dynamic and fluid representation of movement, choreographed by software and controlled by data drawn from Equinox members entering their various locations around the world.

BREAKFAST’s next new medium will debut in December 2020 in Denver, CO, as part of a large-scale artwork stretching over 30-feet long.